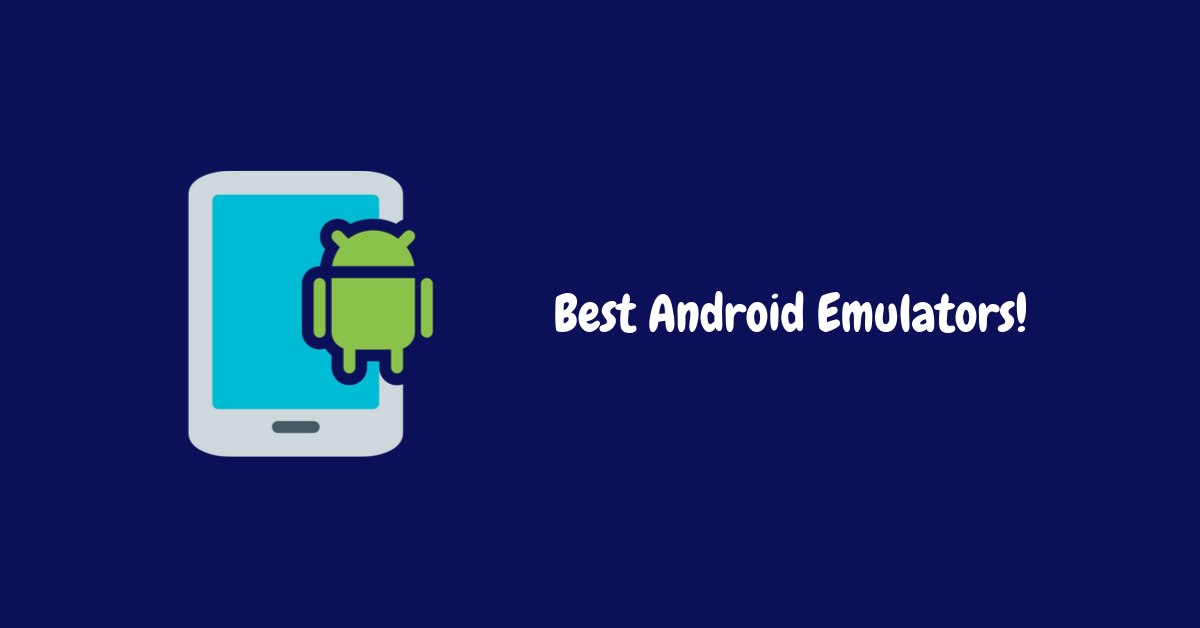 Android Emulators are great. They provide a way to PC users to run android apps and games on their PC which would be impossible otherwise. There are many uses of android emulators like testing new apps and running current apps or games. Thankfully, there’s no shortage of them today.

This also creates a problem, we have lots of the emulators to run android but there are only a few of them which are good. That’s why have created this article, here you will know about the best android emulators present which you can use to run any android apps or games. So without further ado, let’s begin…

Nox is one of the best free Android Emulators out there. It is perfect if you want to play Android games on your computer. You can find a large number of features and options in Nox Player. And these can be quite useful while playing mobile games using your keyboard and mouse. One feature worth mentioning in the Nox Android Emulator is key mapping. As the name suggests, it allows the user to map any keys to the buttons present in the mobile game.

Due to this, you get quite interactive controls while playing Android games. And you can do so using your keyboard and mouse. Not only that but Nox users can even set up keys on the keyboard to perform touch gestures. This can be useful while playing touch-based games on your computer using the Nox Android emulator. Apart from the controls, the performance of Nox is also pretty good. You will never run into any performance issues. It can easily work on low-end computers as well. Not only that but it also uses hardware acceleration. This allows you to emulate Android games and apps using your computer’s GPU.

Most of the Android emulators out there allow you to run Android apps quite easily. But these emulators do not offer an experience similar to an actual physical Android device. And this is where Bliss comes into play. This Android Emulator runs using a virtual machine on your computer. Due to this, it offers an experience quite similar to an actual Android device. The Bliss emulator works similar to emulating an operating system. It is just like running Linux on your computer using a virtual machine. Not only that but if you want to, you can even dual boot Android along with Windows on your computer.

As a result, your emulation experience will be much better. It is just like using an actual Android device. Unfortunately, this Android emulator is targeted at advanced users. You need to be familiar with OS installation and virtual machines. As a result, using Bliss is not as easy as using other Android emulators out there. But once you get it working, you will have a great experience. Bliss allows you to use Android 8.0 oreo on your computer. And the performance of this Android emulator is also quite good. You will not run into any lags or stuttering while using Bliss.

MEmu is another popular Android emulator among gamers. As you would expect, MEmu allows you to run mobile games on your computer quite easily. Not only that but this emulator is also highly compatible. As a result, unlike many other Android emulators, MEmu works with both AMD as well as Intel. And this means that no matter what computer you have, you can use MEmu without any issues. Similarly, MEmu also supports both NVIDIA and AMD graphics card. So, if you have a graphics card in your computer, it can help quite a lot while playing games using MEmu.

This is possible as MEmu uses hardware acceleration. As a result, you can use MEmu to play mobile games on your computer while having a smooth experience. Another great thing about MEmu is that it supports a lot of Android versions. Due to this, your game will most likely work in MEmu without any issues. The MEmu emulator is also quite popular among Android game developers for testing. MEmu allows you to run multiple instances of a single game. And this can be useful for bug testing while developing an Android game.

Droid 4X is one of the oldest and most popular Android emulators out there. And it offers a very simple and straight forward user interface. As a result, the emulator looks quite simple without any bells and whistles. Not only that but it also makes this emulator quite easy to use. Even if you are new to Android emulators, you can use Droid 4X without any issues. Even though this emulator is not made for gaming, you can still enjoy some casual Android games.

But as you would expect, you can also run other productivity apps on your computer using this emulator. Unfortunately, Droid 4X does not receive updates anymore. Since this emulator is quite old, its development has stopped. But it still works with all the latest Android games and apps out there. Although, you can still run into some issues while emulating certain apps on your computer. In such a case, Droid 4X users might have to use a different program for using Android apps on a PC.

And one of these options allows the user to emulate Android apps. This feature is mainly made for testers and does not work as good as other emulators. But it is still a great method of playing around with different Android apps and games on your computer. Unfortunately, since it is an IDE, it is a little complicated to use. And you have to first learn Android Studio before using it for emulating apps. Although if you want to develop Android apps, then this can be a great option.

Remix OS is a highly popular Android operating system for computers. And as per its name, it is not an emulator for running Android apps on your computer. Instead, it is an Android build made for installing on computers. But it a well developed Android build unlike some other options out there. The whole interface of this Android version is made for a computer. It works perfectly with a keyboard and mouse. In fact, you will have an experience quite similar to Windows.

One of the best things about Remix OS is that it is still in development. As a result, you can expect timely updates for it over time. And you will always have the latest Android version while using Remix OS. Not only that but it even offers a lot of features made for gamers. These can be helpful while playing mobile games using your keyboard and mouse. Apart from that, you can also modify the user interface of Remix OS. As a result, you can make it look like however you want it to be. But the best part about Remix OS is that it is quite easy to install.

ARCHON is an Android Emulator that was released not a long time. As a result, it offers the latest features and options available out there. Not only that but this emulator is quite different from its alternatives. Most of the Android emulators require you to install them on your computer. On the other hand, ARCHON gets integrated into Google Chrome. You can simply download and install ARCHON from the Chrome Web Store. And since it is completely free to install, you should definitely try it out.

KO Player users will not face any lag or stutters while using it. Most Android emulators out there come with a lot of advanced features and options. But that is not the case with KO Player. Instead, this android emulator focuses on basic things. It provides things like a simple user interface, easy installation process, the latest Android version, and much more. It even supports key mapping for casual gamers who want to play mobile games. As a result, the whole experience is quite great while using the KO Player Android emulator.

Geny Motion is another Android emulator made for Android developers. You will find a lot of options and features in it. And these can be useful to developers in a lot of ways. While this emulator is not free to use, the price can be justified by a lot of users. Most users of Geny Motion are Android developers who want an emulator for testing apps. And this emulator works on both Windows as well as macOS. Apart from that, Geny Motion also supports different versions of Android. You can test your app quite easily while emulating it on any Android version of your choice.

Even though this emulator provides a lot of features, it is not the best option for gamers. When compared to an emulator made for gaming, the performance is not the same. Not only that but there are no key mapping features either. Instead, you will find a lot of things used by Android emulators. Even though Geny Motion is made for developers, the user interface is quite easy to use. You can get used to this emulator even if you are not a developer. And it makes this app quite good for running casual Android apps on your computer.

But when it comes to using it, Prime OS works just like a normal emulator. You can use this emulator for both productivity apps as well as Android games. And it even offers keyboard and mouse support to the user. You can also make keyboard shortcuts using the key mapping feature. This can be quite handy while playing Android games on your computer. The performance of Prime OS is also quite good. It works on most computers without any issues. And even if you are playing games, it works without any lag or stutters.

These were the very best android emulators you can use for running anything the android platform has to offer. Every one of these android emulators works flawlessly on Windows PC, some also run on macOS and other platforms. These are great even if you’re a developer or just a person looking for the android experience.

This marks the end of this article, we hope that you found an emulator for your needs. So, which is your favorite android emulator among these? Did we miss any? Let us know in the comments below…