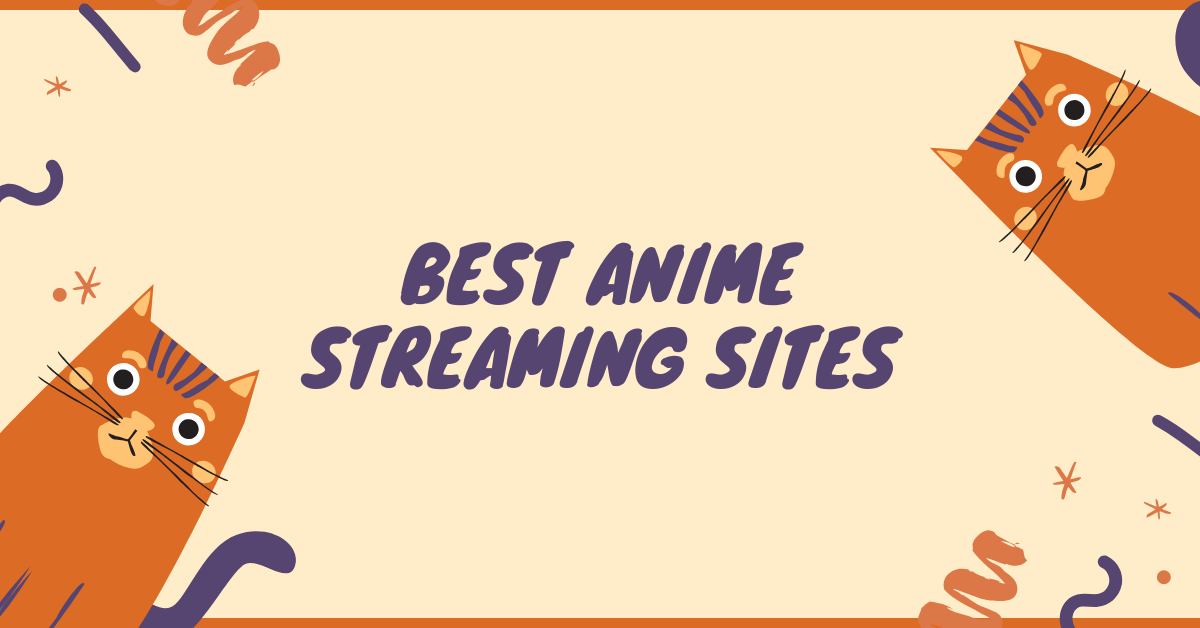 For those of you who don’t know anime is, it’s just a short form of Japanese animation. It began way back in 1917 and started to become popular in the 1980s with shows like Dragon Ball Z, Fist Of the North Star, etc. If you’re into watching online series and have never watched animes we suggest you give it a try. It’s an amazing experience.

However, watching animes in high-quality is hard, there are tons of sites which provide animes but most of them lack one thing or the other. Some don’t have much anime series, while some are just filled with spammy ads and malware. This makes finding the perfect anime streaming site a pain in the ass. But don’t worry, we have made this article for our anime lover friends.

There are only some sites remaining which you can use to watch animes. Of course, finding average sites is easy but finding sites with High-quality anime and lots of series is tough. Here you will get to know about some of the best sites to watch anime online in High-quality. In this list, we have covered both paid and free anime streaming sites. Let’s begin…

First up on our list we have KissAnime, it’s an anime streaming site I’ve been using since years to watch my favorite animes. KissAnime is one of the most popular sites, if not the most popular one to watch animes. More than 100 million people visit this site monthly. It’s free to watch, but you will sometimes get popup ads.

We recommend that you use an Ad-blocker while visiting this site. Even if the popups are harmless they can be irritating at some points. You will need to register with your email if you want to download the anime series or movies. They have thousands of anime series on their site which you can binge watch. There you can watch anime in 480p, 720p or 1080p.

Anime-Planet the second site on our list can be used to watch animes, and the thing great about this site is that fully legal. If you’re someone who’s against piracy, don’t want to spend money and still want to watch anime then it’s one of the best bet. Anime-Planet streams anime from Crunchyroll which is an official anime distributor. (We will cover it in details later.)

It’s a site which receives more than 10 million visits per month. Anime-Planet is created by anime fans for the anime fans, it’s maintained by a small team of people. You can also contribute to their site if you want, you will need to sign up. This site covers thousands of anime series and you can also read manga from there. It’s a good site to watch animes.

Want to watch anime both in dubbed and subbed versions at no cost? If yes, the Anime Freak is a great choice, it offers both subbed and dubbed anime series for free. It’s very easy to use and clean website, at the homepage you can see all of the recently updated series. If you want to look for a particular anime you will need to use the search option.

The UI (design) of this site is very clean. The player is also very good which provides many options like autoplay, bookmark, add to watchlist, etc. More than 10 million people come every month to this site to watch their favorite animes, it’s the same in popularity as Anime-Planet. It’s one of the most popular sites to stream anime online.

Anime Lab is one of the new anime streaming sites. If you want to stream anime legally then this is one other option. It’s one of the few anime streaming sites for which you have to pay to get full access. After all, those who don’t pirate pay for the content. And, it’s great to support people who make anime, if you can you too should do the same.

However, Anime lab is only exclusive to Australia and New Zealand. You can use a VPN to access their website and watch anime if you aren’t from these 2 countries. Anime Lab offers both free and paid membership plans. With their free plans, you can only watch some anime series, whereas with the paid plan you have access to over 400 anime series.

There are lots of animes available on NetFlix such as Seven Deadly Sins, Magi, Death Note, etc. There are hundreds of anime you can watch on NetFlix. It’s also 100% legal so you don’t have the guilt of watching anime for free. You can also download anime episodes for viewing them offline. However, it does have a lot less anime compared to sites like KissAnime.

Everything about the Anime Hub site is great. This is the only anime streaming wite which doesn’t have many ads (as far as we checked). All the anime series are up to date and they have all the popular anime series you would like to watch. They only have one play but it works without any flaws, it doesn’t buffer and doesn’t have any downtime.

It’s one of the best websites we’ve found, it’s clean and the design is impressive. They also have many shows and is free to watch, it’s a site which you must check out if you love watching anime. Anime Hub doesn’t host file on its own server, they are hosted on third-party servers. You can watch both dubbed and subbed animes on Anime Hub.

9Anime is one of the great options for anime fans around the world. The site includes a huge catalog of anime shows and movies you can watch. 9Anime also have shows from almost every genre like action, adventure, drama, a slice of life, etc. What makes this site amazing it that every video they have is in HD. Also, there’s no need for registering to watch any anime.

You can also out different video servers if somehow any server isn’t working. The recent animes are updated daily on the homepage. If you’re looking for a great anime streaming site then 9Anime’s a reputable one. It’s also one of the fastest loading sites when compared to some of the other anime streaming sites. It’s a good site to watch anime shows for free.

AnimeBam is one of the new anime streaming sites that not many know about. It may not be as popular as other ones on this list but we feel it’s one of the best. Here you can watch all of your favorite anime shows to your heart’s desire. On AnimeBam you can watch both dubbed and subbed anime shows, which is a great thing if you don’t know Japanese.

There are thousands of anime shows that you can watch on AnimeBam. Their site is clean and has a good video player which doesn’t buffer much. On their homepage, you will find the recent anime shows. If you don’t know what you’re looking for just click the random button. It will lead you to a random anime. You can also browse through popular animes.

Do you want a site which lets you watch subbed & dubbed animes for free? If yes, the GoGo Anime is one of the best anime streaming sites which you can use for watching anime. The site is available worldwide i.e, you can access this website from any part of the world the only thing you will need is a working internet connection. (That’s obvious, isn’t it?)

This is a well-organized site, you can watch anime series, movies & even read mangas. With GoGo Anime you can even download the animes which isn’t available on most of these sites. It’s a good site to binge-watch animes. You will find this site amazing because it is, you just need to think of an anime series and search it. You will get it no time.

Crunchyroll is without a doubt one of the best anime streaming sites. From Crunchyroll, you can get the latest anime series and also join their community where you can talk about your favorite shows with like-minded people. There are thousands of anime you can watch on this website. And, it’s not limited to anime series you can also watch Korean dramas.

All of the anime series in Crunchyroll are in HD. However, to access all of the content you will need to buy their membership because they are an official distributor. You can try out their trial if you like them go ahead and purchase the membership. You won’t see any ads on Crunchyroll, it’s like NetFlix for anime. They have lots of anime series.

Like NetFlix, Hulu is also a well-known online streaming service. If you want to watch high-quality animes then Hulu is a good choice. They offer lots of anime series but the best-known ones are Afro Samurai, Sword Art Online, etc. They are not only limited to anime series as you can also watch anime movies with lots of other content.

However, it isn’t free to watch. You will need to pay 5.99$/month to get started with Hulu. They also offer a 7-day trial, on which you can watch a lot of animes and if you find the services good enough, you can pay for them. It’s up to you. You can watch both dubbed & subbed animes on Hulu. It’s one of the best anime streaming websites.

Chia Anime is known as one of the first anime sites to emerge out of Japan. With the help of this site, you can find any anime you can think about. Some things we like about this site are – the site loads fast, there are no ads while watching, etc. It’s one of the most well-known anime streaming sites which people use to watch anime series.

However, the anime series is only in the subbed version. Which means there will be Japanese audio with English subtitles, it’s a let down for dubbed anime lovers. If you can compromise on this then it’s a good site. The site’s office is located in Japan and you can access this website from anywhere around the world. There aren’t any restrictions.

The last anime streaming site we have on our list is KickAssAnime, as the name suggests here you can watch some kick-ass anime shows and movies. It’s a site which isn’t well-known but should be known by more people. With this site, you will be able to watch both dubbed & subbed animes without any hassles. It’s a good site, you can use for watching animes.

There are two servers on this site, if one doesn’t work you can watch anime through the other server. KickAssAnime has thousands of anime shows and here you will be able to find anime shows on the day they are aired. It’s one of the fastest sites to air recent animes, KickAssAnime also shows the schedule at which animes will be airing, you won’t have to wait much.

There you have it my otaku friends, these were the best anime streaming sites you can use to watch your favorite animes. All the sites on this list are personally tested by yours truly (I finished 1 anime series in the process). These sites are the very best if you want to watch anime without worrying about ads or malware. The video quality is also top-notch.