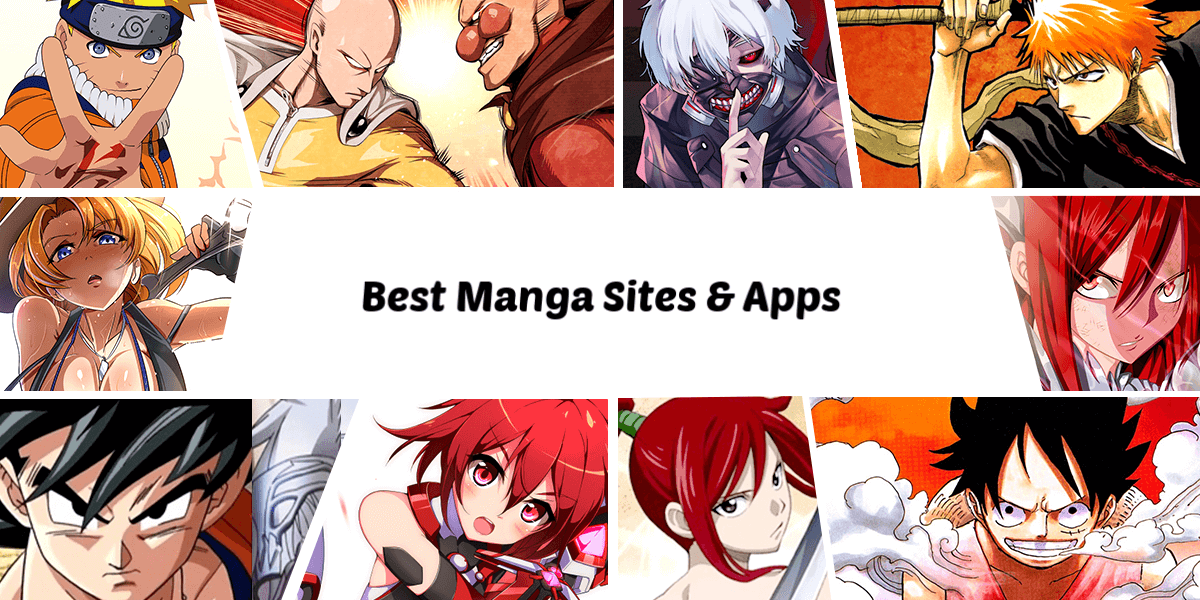 Are you an otaku who loves to read mangas but can’t find manga sites and apps to read them? If your answer is Yes then we have good news for you. Today we are going to cover some of the best manga sites and manga apps where you can read to your heart’s delight.

Many people think that manga is famous only in Japan. But that’s where they are wrong! Manga is popular around the world and even I am a big fan of Japanese Manga. Some of my favorite mangas are – Berserk, HxH, Fullmetal Alchemist, etc. You should also read some of them they are amazing.

At first, reading manga may not look so appealing but once you start reading it will become an addiction. You will surely become a manga fan. And then you will look for manga sites and manga apps to read them, I also did the same so I kinda know what it feels like. It feels pretty good!

For starters, Mangas are Japanese Comics. (That’s the simplest explanation I can provide.) Each manga consists of unique stories, plot, and characters. If you’re a fan of comics then you will find many similarities between them. However, sometimes Mangas are better than comics.

Most of the source materials of Animes comes from Mangas. Also, Animes which follow the mangas are better than the ones which are anime-only. The craze of mangas is real! Some of the top manga artists earn up to 30-50 million USD per year. Millions around the world read mangas.

But there is a problem, mangas are published in the format of books i.e, they aren’t originally published in digital format. This is the very reason it is very hard to collect mangas outside Japan. If you want manga in the original format you will have to months to get them.

There are many manga sites and manga apps where you can read these mangas for free. Not all these sites have to license to distribute manga, we suggest you purchase original manga even if you read it on a free site to support the manga artist and get more awesome content.

One thing you should also remember is – You should read manga from right to left. It’s translated from Japanese which is written the same way. So without wasting more of your time let’s begin the list…

12 Of The Best Apps & Sites To Read Manga Online

First up on our list, we have Crunchyroll Manga which is one app you would know if you’re into watching anime as their site is also dedicated to providing anime series. The Crunchyroll app is very popular among manga readers as it has a huge catalog of manga series. But, it isn’t a completely free manga app. You’ll need to pay for it if you want to enjoy all the mangas.

However, you can try out some mangas by creating a free account which will give you access to some manga series. If you find the app good and worthy you can buy a premium subscription. With the premium subscription, you will also get access to all the anime content, that’s a bonus. It is also a 100% legal app for reading mangas.

The Zingbox Manga app comes with a huge list of mangas, on this app you can read as many mangas you want to read. If you’re new to the world of reading the Japanese manga then this is one of the best manga apps to get started with. The app has a very good UI and comes with an eye-catching design.

While this app is good for new users it misses many features that other manga apps provide but with this app you will get to focus more on reading than just testing out other features. What we like about the app is that you can also download the manga offline for reading them later, which not many apps allow.

MangaZone is another manga app that you can use to read mangas on your smartphones. The best thing about this app is that it is available on both Android & iOS. While some apps on this list are only available for Android, MangaZone isn’t one of those. And, it is one of the best apps to read manga on mobile devices.

What makes MangaZone better than others it that it has a huge collection of over 15,000 manga series and it gets the mangas from 8+ different sources on a daily basis. So, even if one of the 8 sources is down you still have 7 others which work flawlessly. Isn’t that great?

MangaAOn is the manga app that I’ve used for a long time. I can’t count the number of mangas I’ve read on this app. I personally love this app, so I may praise it a lot. There are many things I like about this app such as the UI is good, it’s easy to navigate around this app and it has a good design.

It is also a pretty solid app for reading manga, there are tons of manga which you can read with the help of this app. However, it will show ads after you read 10-15 pages of any manga but they aren’t annoying and easy to skip. You can easily ignore these ads and enjoy mangas to your heart’s delight.

Manga Rock is one of the first sites which comes to mind when someone asks “Which are your favorite manga sites?”. While it is known as a popular manga site, it also has a mobile app which gets a lot of praise. The site is visited by millions of people on a monthly basis, Manga Rock app also has millions of installs.

It is one of the most popular sites for reading manga. Both – their site and app are top-notch, the UI is simple and design is unique and looks good to the eye. As of writing this article, the site has over 18,204 mangas. If you can think of a manga, you will find it on the Manga Rock app & website.

When it comes to free apps and sites people assume that the user will be bombarded with ads. And it’s true to some extent, some site and app owners do so, but when it comes to a complete free manga app there is nothing better than Tachiyomi. Yes, it is even better than the Manga Rock app that’s why it is so popular.

Tachiyomi is just like Manga Rock but it is free and has features which are on steroids. There are so many features on this app which I like such as – offline downloading, online reading from different sources, light and dark themes, etc. It an open source app and the only manga app you will ever need.

One of the very first sites which offered manga online, MangaFox has been in the game for a long time. It is one of my top sites, I remember using MangaFox when I started reading manga on the internet. Those days are gone but this amazing site still remains and is still kicking ass. I like this site.

There are many reasons that many people love using this site. With MangaFox you can even download mangas on your device, it’s the feature that made me a MangaFox fan. You don’t need to sign up for using this site, there are little ads but they aren’t as annoying as ads on other sites. You should try out this site.

Another site which we think has got everything right for the manga fans around the world is MangaHere. There are over 10,000 series that you can read on this site. If you start today, it will take you decades to finish all the mangas on this site so I suggest you to read only the popular ones.

Like most of the sites on this list, MangaHere is also free but you will have to cope up with the ads sometimes. Apart from that, I don’t there’s anything negative about this site. This site also has a pretty cool design. There’s also a separate section if you want to read spoilers and news of your favorite series.

The manga version of the popular anime streaming site, KissManga is one of the top sites you can use to read manga online. On KissManga, you can read any manga without paying for anything, the site is totally free but with a few ads which can be irritating sometimes. Apart from that, there are no flaws.

There are many features provided by the KissManga site. Some of the features which I like are – the comments section to discuss the chapters, the community forum, etc. It is a good site and finding any site won’t take any time. The mangas are sorted in a good manner, even beginners can use this site easily.

MangaFreak.com is one of the biggest manga sites on the internet. One of the best things about this site is that you get a dark theme which looks and feels great when you read the manga. You can read manga without any kind of distraction, it lets you focus only on the manga’s content.

Apart from the looks, t also has a huge collection of mangas, you can read all the mangas you want and you still won’t be able to finish all of the site’s series. Mangas of all the genres are present here like action, adventure, romance, etc. It is one of the top sites to read manga without any hassles.

Update: Manga Freak is now redirecting to Manga Reader, the old site is no more and now works under the new domain.

MangaStream is the first site where some fans translate a manga from Japanese to English. If a manga is popular then no site can do translation faster than MangaStream, that’s we all love about it. It is also completely ad-free if you want to support the site you can donate them money.

However, one thing you should note about MangaStream is that you will only find some latest chapters of any manga here. You won’t be finding full volumes like other sites. This is done because MangaStream wants to support the original creators while providing the latest scans.

Ok, this is a site which I consider to be the best site for reading manga online. Everything about this site is fantastic when I first visited the site I was amazed by the site’s clean design and simple UI. If you’re someone who gives importance to a site’s design then this is the best one.

Manga Kakalot might be a new site when comparing to other sites on this list but it is no means less than them. It is better than many sites on this list. This site is even better when you use it on a mobile phone. It also has a huge library of mangas. Overall, it is my favorite site for reading manga.

These were some of the best manga sites and manga apps you can use to read your favorite manga online. Apart from one or two sites all of these are free. I have used almost all of these sites to read manga and don’t know how many hours I’ve put into it. In the end, it was all worth it.

Reading Manga has been one of my hobbies for years. I’ve been reading mangas since 2014, if you’re new to the concept of manga I suggest you check it out. You will love it. As for personal preference, the app that I think is the best in this list is the Tachiyomi app. After that I currently use MangaAOn.

So, these were the best Manga sites and Manga apps. Which one of these is your favorite? Which manga site or app do you use to read manga online? Let us know in the comments below. Cheers!