There’s a piece of bad news for all people who love to watch football online. The popular subreddit with 50k followers, /r/SoccerStreams was shut down after it received a copyright strike from the Premier League. After that, it was shut down by Reddit. Many of the fellow Reddit users are still searching for a replacement but aren’t able to find one.

It was one of the most popular subreddit which Reddit users were using to watch football online for free. Let’s face it no one likes when a top-quality streaming site gets banned. Yes, they are streaming copyright content but the premium plans for watching sports is damn too high in some countries. You gotta pay 50$ monthly just for watching a single football league.

The subreddit i.e, Soccer Streams was one of the most popular subreddits. People surfed this subreddit every week to watch a match of any league they followed. It had the streaming links of every league whether it was EPL, Seria A or La Liga. Many people liked the subreddit for this reason.

Here is the latest message by the moderator – 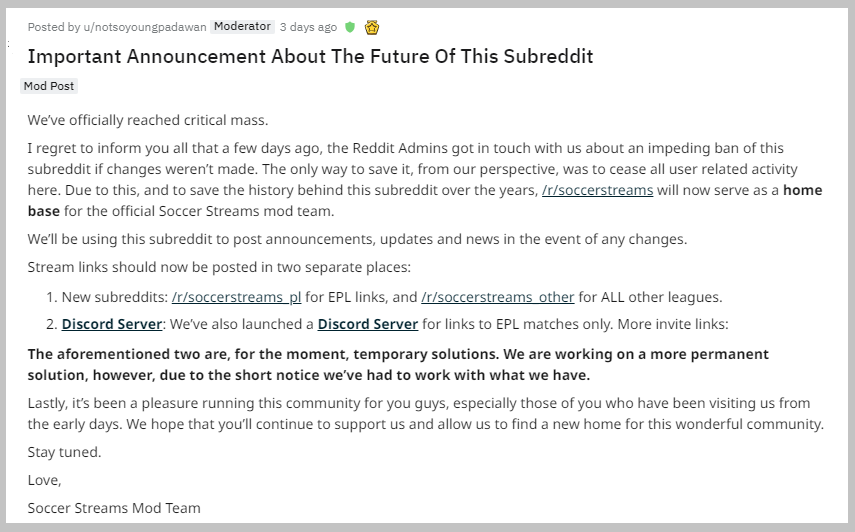 The subreddit became popular during the 2018 FIFA World Cup. It’s said to have more than 100 thousand people streaming through its link daily. Most of the links were of AceStream which is another popular streaming service.

As much as we want Soccer Streams back deep down in our hearts, we all know it’s not going to come back. But don’t worry, I’m going to cover some of the best Soccer Streams alternatives from where you can watch football for free.

I’ll cover this list in two parts, on the first one I will cover the subreddits which work in the same ways as r/SoccerStreams. On the second part, I will cover some websites where you can watch sports.

After the ban of SoccerStreams, this subreddit came to life. It was started just after the former subreddit was taken down. This subreddit is also for football fans and the moderators provide live streaming links just before the start of the match. But this is also not a permanent solution as Reddit is taking down subreddits which are sharing copyrighted content.

There are only a few subscribers on this subreddit but they are very active. Also, all the links work fine. The subreddit also has many rules which reduce spam and only makes it users share links which are working, the links which are shared here are in SD or HD quality. The quality is mentioned in the post.

SoccerStream69 is another subreddit created for football fans who want to stream the sport online without any hassle. Like I said earlier, Reddit is removing subreddits so this isn’t a permanent solution. However, you can still enjoy football live streaming link till they last on Reddit. Who knows they won’t even remove these subreddits.

Even though this subreddit isn’t close to the former subreddit which was taken down so it doesn’t cover every major league. You also won’t find any live streaming links here but the links you will find will be mostly working. Asian leagues and other small leagues won’t get any coverage on this subreddit.

Most of the links on this subreddit link out to AceStream which means you won’t have to worry about buffering or low-quality links. There are also tons of links posted before the match to select from. If you’re into live streaming and looking for a SoccerStream Alternative I recommend you check out RedditSoccer.

5 Best Alternative Sites Instead Of /r/SoccerStreams

Sony is one of the biggest brands, we all know that. But one thing many people don’t know about is that with the Sony LIV app (or site) they can stream any sport they want to. Plus, it’s an official broadcasting site which is 100% legal although you will have to pay a small fee for the subscription it’s worth it.

BossCast is one of the popular streaming sites which is also a direct alternative to Reddit SoccerStreams. Here on this site, you can stream any sports you want to watch. The major sports it covers include – Football, Moto GP, Hockey, etc. You should visit this site with a VPN.

There’s hardly anyone who doesn’t know about ESPN as its one of the oldest sports news provider. What many people don’t about them is for their US audience they have a live streaming platform named Watch ESPN. There you can live-stream every major sport, if you’re outside the US you can use a VPN to access the site. (Many people use this trick.)

Owned & managed by Star India group, HotStar is the most popular sports streaming service in India. What most of the people use HostStar is for watching cricket leagues like IPL. But only a few people know that they also have official football broadcasting rights. It also charges a very small fee so it’s a blessing for football fans.

If you’ve used the internet for a long time then you would know about Discord. If you don’t know, it’s just a VoIP which people use for file, text, audio sharing with others who like to play video games. It’s an app which is used for talking with other like-minded people and isn’t just limited to video games.

You can install the Discord App on any OS be it Windows, Mac OS, Andoird, iOS, etc. Right after the SoceerStreams subreddit was taken down, they started a discord channel. It works in the same way as a subreddit where you can comment / message and post threads, etc.

Like the subreddits, the mods will post live Football links on discord 1 mins. before the match begins. And the links will be live only for 30 minutes. This way there won’t be any way to take them down.

Below is the direct link to join the Soccer69 discord channel –

As I have said earlier, SoccerStreams was one of the best places for football fans to watch their team’s matches without paying anything. it was best for those who never wanted to pay money for subscriptions. On /r/SoccerStreams, you would always find a link to stream the match 30 mins before it began.

Also, there were not only one but many links to choose from. All of the streams were in HD, some were even better than official broadcasting. (LOL!) That’s what made it so popular. But, like all good things have to come to an end, it also had to.

Streamers always find a way. So, if you’re the one who won’t lose and want to try out other sites use the alternatives I have provided. Although, I don’t promote piracy of any kind and recommend you to watch official broadcasting to just be on the safer side. In the end, it’s your choice.

If you liked the article please share it with your friends, family, etc. Each share counts and will help in our growth so we can provide you more information. Thanks!