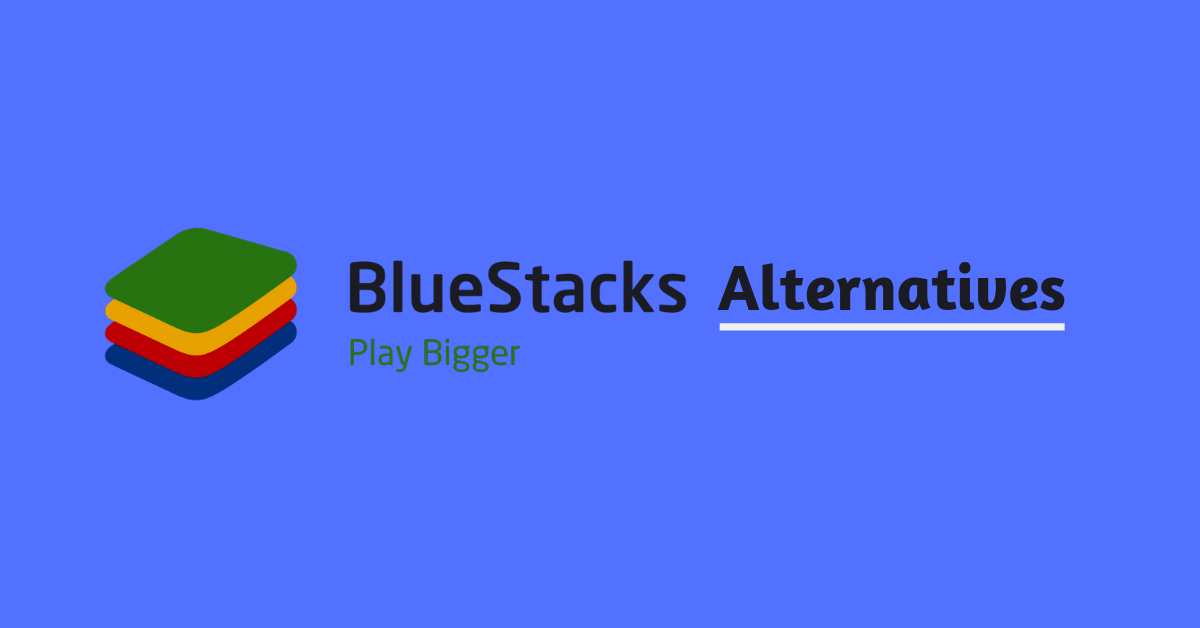 Looking for the best Bluestacks alternatives? If yes, your long search comes to an end right here. In this article, we will cover some of the best Emulators you can use instead of Bluestacks.

Before we begin the list we must know about one of the most popular Android Emulator. I know if you’re looking for a Bluestacks alternative you must already know about it. But not all people know about Bluestacks. If you know about it then you can directly jump to the list of best alternatives.

For those who don’t have any idea about Bluestacks, here’s a brief summary of the application…

What Is Bluestacks & Why Is It So Popular?

For starters, Bluestacks is an Android Emulator i.e, it’s a PC app that lets you run Android apps on Windows. When anyone talks about Android Emulators the first one on their mind is Bluestacks. Since its launch in 2011, it has been one of the best ones available in the market.

Bluestacks was also the first emulator of its kind. Anyone who knows about Emulators knows about Bluestacks. You can install Bluestacks on either Windows or Mac OS.

However, as time has passed many users of Bluestacks have reported some problems. Some of the problems that many people face with Bluestacks are – it’s reported to be slower than other emulators, it provides fewer features, the gameplay feels laggy. etc. These are some reason people look for Bluestacks alternatives.

While it may be the best emulator for some, it isn’t the best one. That’s why we have made this list of the best Emulators similar to Bluestacks. You can also give these Emulators a try…

First up on our list of Bluestacks alternatives we have the Andy OS Emulator. It has a pretty catchy and funny name, this emulator is the best choice in case you are fed up with using Bluestacks. Andy has everything that Bluestacks provides but is more light-weight to use, this is one thing we like the most about it.

There isn’t an Android app that you can’t run on Andy. It’s undoubtedly the best alternative to Bluestacks. With Andy Emulator you can even access apps directly from your smartphone. If you’re using Andy for a long time you will feel like you’re using an actual Android smartphone. It’s just soo good!

Remix OS Player is also one of the only Android Emulators which are updated on a regular basis. You will get an update almost every month. While I said you need a high-end pc for a smooth experience, you can still run it on low-end PC if you only run small apps. It’s one of the better Bluestacks alternatives.

If we are taking about Emulators similar to Bluestacks then it will be a crime if I don’t include GenyMotion in the list. GenyMotion is powerful yet easy to use Emulator for running Android apps. This Emulator is free and is available on both Windows & Mac OS. It’s one of our favorite.

What we like the most about GenyMotion is that you can run any Android apps & games without facing any lag issues. If you want to run big Android games you should have a high-end PC, else if you just want an Android experience then you’re good even with potato PCs. GenyMotion is a good Emulator.

You would be kidding if you say that you don’t know about MEmu if you’re using Emulators for a long time. MEmu is one of the most popular Emulators similar to Bluestacks. Installing this Emulator is pretty easy as you just have to visit the official site and download the application.

Many people often say that MEmu is better than Bluestacks and we kinda agree with them. There are many features which MEmu provides and Bluestacks doesn’t. This Emulator works on every PC it doesn’t matter even if you’re using a decade old PC, it will run smoothly. It’s also pretty lightweight.

Windroy is one of the latest Bluestacks alternative available on the internet. Although it’s quite new, it’s pretty impressive. With the help of this Emulator, you can easily run Android apps on your PC. This is quite unique as it also allows you to chat with strangers with an in-built messenger.

Windroy is free-to-use i.e, you don’t need to pay to install this application. You can easily install Windroy by visiting the official site and downloading it. The Emulator is available for both Windows & Mac OS. Even if you’re a Mac user you can enjoy the Android experience with Windroy.

Dolphin Emulator is quite popular among Emulator users. If you ask someone to name the best Android Emulators Except Bluestacks then many would name Dolphin as one of the best alternatives. Dolphin is an open source and very easy to use Android Emulator, it also doesn’t have any hidden charges.

If you love playing Android games on Emulators then this is one of the best choices as it allows you to replay the gameplays and find if someone is cheating or not. You can replay yours and your opponent moves, that’s an amazing feature. It can run all the games by GameCube.

AMIDuOS is one of the lesser-known Emulators similar to Bluestacks. But when it comes to features it is no less than Bluestacks in any sense. With the help of this emulator, you can run any android app of your choice on your PC. It is easy to use and lightweight Android Emulator.

However, one thing you should note is that it’s a freemium application i.e, it has both free and paid versions. If you just want to get the basic experience of Android then the free version will be good. But if you want to experience all the features then you will have to get the paid version of AMIDuOS.

Wanna know which Android Emulator has the power to knock out Bluestacks? Yes, It’s the KO Player (nice name). This Emulator comes packed with lots of features. What we like the most about this Emulator is that it is built for playing games. If you love playing games then it is for you.

You can run almost every android apps or games with the help of this Emulator. The best part? It is free to download, all you need to do is to visit the official site and start downloading the application. There are millions of apps and games on the play store and KO Player can run all of them easily.

Another Emulator you can use to run Android apps and games on your PC is the Android-x86 Emulator. While it also isn’t much popular among casual users who want to run apps, it is well-known among developers who want to test out the codes of their Android apps. It’s a good Bluestacks alternative.

Downloading this Emulator is also the same as downloading other Emulators. You will have to follow the same steps i.e, go to the official site then download the application. With this Emulator, you can run tests on different versions of Android. It is one of the best for Android app developers.

Youwave is one of the most popular Android Emulators on the market. When it comes to popularity it is the same as the KO Player. We also think that it is one of the better Bluestacks alternatives. While it may not be as popular as Bluestacks some people feel that it is way better than Bluestacks.

It’s also a free Emulator which is only available for Windows. What we like the most about this Emulator is that it provides the ease to save data on your desired folder. This is something that many Emulators lack. You can download this Emulator from the Official site without any issues.

Another Emulator which is better than Bluestack, we have is Droid4X. It works in the same way as other Emulators, you can install and run any Android app on your PC. You can download the Droid4X Emulator from the official site. Droid4X is an Emulator we think more people should know about.

One of the thing that we like about this Emulator is that you can install apps or games directly from the store i.e, in the same way, you did with Bluestacks. You can use this Emulator to play games on your PC without any kind of lag. We also used this Emulator and found it pretty solid.

Quick Emulator which is also known as Qemu, is one of the best Android Emulators present on the market. It’s also a pretty good alternative to Bluestacks. Just like the Dolphin Emulator, Qemu is also an open source Emulator which makes it completely free without any hidden charges.

You can use Qemu on Windows, Mac OS, and Linux. The features we like the most about Qemu are – system emulation, KVMs, User-Mode Emulation, etc. It is one of the most feature-packed Emulator on this list. You can easily download this Emulator from the official Qemu website.

The last but one of the best Bluestacks alternatives on this list is the Nox Emulator. It is a lightweight and easy to use Android Emulator for Windows & Mac OS. With its help, you can run the Android app of your choice on your laptop or PC. If you like to play games on Emulator then it’s a good choice.

We do think that Nox is one of the best Android Emulator you can use instead of Bluestacks. While it may lag on Potato PCs (PC with low specs), it’s way better than the former Emulator. Many people who use Nox Emulator love it due to the performance and its features.

These were some of the best Bluestacks alternatives you can find to play games or run Android apps on your PC. We have tested each of the Emulators and ranked them on the basis of their performance, speed, and features. Some of these Emulators are also good for developers to test out their apps or games.

So, which one of these Bluestack alternatives do you find the best? Which Emulator do you use on a daily basis? Did you find the Emulator you were looking for in this list? If not, then suggest us in the comment box. See ya next time…Cheers!